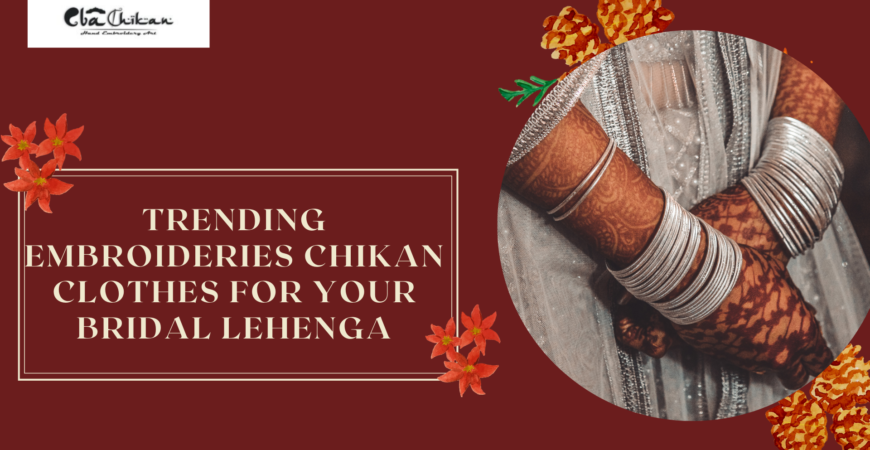 Pin-like needles resembling the shape of a crochet hook create a shape that sticks to a work of art known as “Aari’s work”. For this work of art and “Muthia”, a needle with a sharp tip is used, which creates a creative print with a chain stitch. Lucknowi Chikankari work is famous because of the fine, delicate threads that emphasize the spirit of hand embroidery.

Appliqué is a type of embroidery that uses smaller patches or fabrics that are applied or sewn onto a larger fabric or surface. This is usually a whole piece of cloth. Application is rooted in French culture and means “something applied” or something applied.

Bandhaj, also known as bandhani, is a binding and coloring method primarily practiced in the states of Rajasthan, Gujarat, and parts of Uttar Pradesh. The word bandhani comes from the Sanskrit word banda, which means “to bind”. Bandhani is an art that consists of painting the fabric with threads in several places to create various patterns.

The art of clamping beads together by threading them with a sewing needle, or beading needle and thread, or thin wire, or sewing them onto fabric. Beading techniques are divided into weaving and off-loom weaving, threading, beading embroidery, knitting, and beading. Pearls are also used for religious purposes, as good luck charms, and as medicinal products. Beads, pearls, crystals, hand-woven patterns, colored stones, and shiny threads are some of the most popular methods for embroidering a piece of fabric.

Cutdana work refers to the use of stones that have been cut at certain angles to facilitate the reflection of light. These stones are sewn into the fabric with thin threads to create all kinds of patterns and designs. Cutdana works are usually worn on more formal occasions because of the intricate details in the clothes, as they are considered rich and heavy.

Dori’s work, known for its uniqueness, penetrated the world of name and acknowledgment. It is considered one of the most impressive types of Indian embroidery works of art embodied with strong and strong strings or threads. Zardosi stitching and sewing stitch making are taken under Doris Arbeit’s wing, accompanied by colorful and high-quality threads.

Dabka (also known as Dapka, Dubka) means “feather-like thread or thin coiled wire” that is sewn into intricate patterns. The harness is sewn to the fabric with a needle through the center of the pattern. In other words, dabka work is the intricate embroidery or needle and thread work of the land of Rajasthan.

Taar is a form of embroidery made on men’s and women’s clothing. Just as the name “Ek Taar” translates as “One-Wire” because it is the Hindi name for embroidery. And It is traditionally made from thin metal threads. This embroidery is usually done in sync with the work of the crystals on the garment.

Gamthi embroidery, not to be confused with gamthi prints because this embroidery made of thick live thread. This form of embroidery originates from Gujarat and is very popular in the state as it is considered a reflection of the country’s culture. More commonly, this form of embroidery is added to the Ghagra Choli, which is a famous Gujarati dress. It is known for its embroidered texture as you can feel the pattern is smoother than other embroideries.